"I am not a conspirator. I am a mother whose son died tragically. I speak on my own, with no one putting words in my mouth. I speak out because my son was killed as a result of the activities of a destructive anti-Semitic political cult."

It is unacceptable for Lyndon LaRouche to claim (EIR news release, Jan. 28, 2010) that my son was on medication and had mental problems. LaRouche's claims are contradicted by the 2003 inquest by a British coroner's court 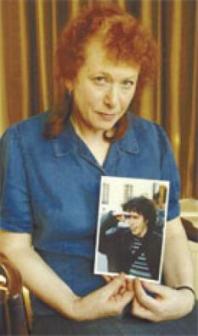 regarding Jeremiah's death where his entire medical records were presented as evidence. There was never any mention of drugs or mental problems. Witnesses who were with Jeremiah during the last days of his life testify he was not on drugs and had no mental health problem. And his friends in Paris testify to this--as did his girlfriend at the inquest.

LaRouche's claim that my son was on medication is also contradicted by the German police's blood tests, the British coroner's court and our private extensive blood tests which found no drugs in his system. Furthermore a witness who was with Jeremiah at the LaRouche cadre school shortly before my son's death made a statement that Jeremiah had a headache and was looking to get an aspirin (!) and that there were no signs whatsoever of mental problems or drug abuse. Therefore for LaRouche to claim my son was on drugs or medication is a very serious misrepresentation.

Of course LaRouche does that all the time by lying to his followers and to potential recruits about the terrible frauds for which he was found guilty by a U.S. federal court in 1988 and sent to prison. In fact, he and his followers ruined the lives of many, many families by stealing their life savings.

Yes, LaRouche was convicted of fraud, but even when faced with the documentary proof of his criminal activity he lies by claiming he was "framed"--thus deceiving people who don't know the facts into giving him yet more money for his extremist political activities.

Although LaRouche appears to have a habitual problem with the truth, I will not accept him slandering my son's memory nor will I accept his organization's oft-repeated claim (most recently in an EIR article on Jan. 22) that I am part of a worldwide plot against his movement. I have never met or spoken to any U.K. or U.S.A. leader such as Tony Blair or Dick Cheney, and have no evidence of a plot against LaRouche by people in high places. I am not a conspirator. I am a mother whose son died tragically. I speak on my own, with no one putting words in my mouth. I speak out because my son was killed as a result of the activities of a destructive anti-Semitic political cult

If there's any "conspiracy" here it is in the efforts of the LaRouche movement to cover up what happened to Jeremiah. They refused to let me speak to the last people who saw him alive. They sent potential witnesses out of the country. They have tried to block any adequate investigation of Jeremiah's death in either Britain or Germany. If they were really as innocent as they say they are, wouldn't they welcome such an investigation?

If there are any lies being spread, they emanate not from high-level British and U.S. politicians but from LaRouche, who lied to Jeremiah by presenting the Schiller Institute as a benign humanistic peace movement and who, now that my son is dead, lies about how and why he died, making negative allegations about him for which absolutely no evidence exists.

What kind of person is Lyndon LaRouche to make such statements? The acts define the man, demonstrating clearly to the world that this is a cult leader who cares nothing for human life and is a threat to young people. His heartless and cynical statements on the web and in print about my son--and similar statements by his followers--reveal what kind of man and organization we have here.

It is time for European governments, the media and human rights organizations to take a very close look at the activities of LaRouche and his colleagues, who are preparing the ground for political violence in our society through their hate-filled propaganda, and are causing misery to families around the world by entrapping their children in LaRouche's web of lies, fear and paranoia.

It is also time for those who were once members and even leaders in the LaRouche organization, and know the truth about it, to redeem themselves by speaking out openly and honestly. It is a hard thing to admit you were wrong, but remaining silent will only allow LaRouche to ruin more lives and wreak more harm on society.