A key to justice in the Jeremiah Duggan case?

Breaching the ex-LaRouche wall of silence

I wrote the below immediately after reading Erica Duggan's article in the Barnet Press today. I offer no apologies for my harsh language.

June 4, 2010--I believe that two categories of information are key to achieving a proper investigation by the German police of how Jeremiah Duggan died. First is eyewitness and hearsay knowledge of what happened to him in Wiesbaden in the early morning hours of March 27, 2003 at the offices of the LaRouche org, and of what subsequently happened to him (or his body) outside that office and on the motorway. There are certain ex-leaders of the European LaRouche movement living currently in Germany--people who quit the org several years after Jeremiah's death--who certainly know what happened, even if they weren't personally present, but who remain silent. 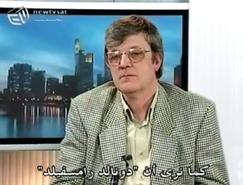 Uwe Friesecke, formerly LaRouche's top person in Europe (except for Helga LaRouche). He knows everything.

Second is knowledge that could explain why the German police are protecting the LaRouche organization. I could be wrong, but I believe the explanation lies in the org's past history as an adjunct of German and other NATO security and intelligence services. Information about this relationship is almost certainly possessed not just by the ex-leaders of the German LaRouche org, but also by ex-members of LaRouche's National Executive Committee in the United States, by not-quite-so-high-up former U.S. members who spent long periods of time working out of the Wiesbaden office in the 1980s and 1990s, and by former leading members of LaRouche's security staff.

I believe that certain of these people will never talk. Those who do eventually come forward may not have the whole picture, but each will have part of the picture. And even if the LaRouche org's relationship with German and other spook agencies, insofar as known by these individuals, turns out to be somewhat less close than I now suspect, surely enough evidence will emerge to attract the attention of the British, German and French media--and thus to embarrass the German authorities into moderating their obdurate resistance to launching a serious investigation of Jeremiah's death.

By remaining silent, the ex-LaRouchians with information in these two categories have caused anguish for the Duggan family. Furthermore, the failure of these former members to reveal what they know about the entire range of the LaRouche organization's secrets has made them de facto enablers of LaRouche's ongoing efforts to recruit and exploit a new generation of disciples. If more young recruits die--say, at some LaRouche indoctrination camp in Eastern Europe where it's easy to evade the law and keep indoctrinees forcibly isolated--the Silent Ones will have blood on their hands.

What will it take to get the ex-members who were "in the know" to finally speak out? Demonstrations in front of their homes and places of work--with leaflets to let their neighbors and co-workers know just how reprehensible their silence is?

If the likes of David P. Goldman and Webster Tarpley (and about a dozen other knowledgeable people, mostly living in the Washington D.C. area)--as well as Ortrun Cramer, Anno Hellenbroich and others in Wiesbaden--complain that this is a call for outrageous harassment tactics, I can only reply: You spent decades of your lives doing far worse to the LaRouche org's enemies (Petra Kelly, for instance)--gladly and gleefully. And you stopped doing such things not because of any principled disagreement with LaRouche's evil ideology (which some of you still proudly uphold in a modified form) or with his nasty tactics, but simply out of self-interest--to escape the personal abuse that LaRouche was heaping on you.

I personally have no interest in organizing demonstrations against the people in question (and I doubt anyone else does either), but I can't help thinking that something should be done to shake them up. Certainly Erica Duggan's appeal to their consciences and to their supposed capacity for compassion (I'm speaking primarily of the German ex-members) has fallen on deaf ears.

The frustrating thing is that it would only take a single knowledgeable ex-member, stepping forward to tell the world everything he or she knows...and the spell would be broken, the ice would break, and the flood gates would open. Any takers?