Being a LaRouche follower is dangerous for your health

"You would be dropped off at an exit ramp from a freeway and stay there all day...That meant that tens of thousands of cars and trucks were spewing carcinogen-laded exhaust into your nostrils and lungs."

From my perspective I begin to think about just how many Labor Committee members have had incredible medical conditions and hope that our future cult researchers can analyze this. Lyn has had the best life available as the endless high-stress environment has kept the cult going and making money to keep the party going. Lyn has had a staff of doctors across two continents with never a worry about anyone else. Just reread his words about the death of Ken Kronberg to get an idea of this. You cannot separate the physical and mental conditions of the cult members from the physical outcome in their later years.

When I first came around, I never saw so many chain-smokers in my life. The offices were smelly affairs which were hardly ever cleaned, except after eviction by the landlord. The fumes from sky-high-stacked New Solidarity bundles and the runoff from the mimeo machine chemicals were the regular atmosphere along with smoke and body odor.

I heard Lyn in person at one conference we put together where he told the room that cigarettes do not cause cancer. Lyn smoked a pipe and just about every member had to get a pipe--a comical look when you look back. Secondhand smoke? Forget it, we did not think that smoking was bad.

What are the some of the possible causes of lymphoma?

One risk is benzene molecules, which we find in what?

Our older members were in a no-win situation. If you were a field hand, you were doing exit ramp deployments day in and day out. 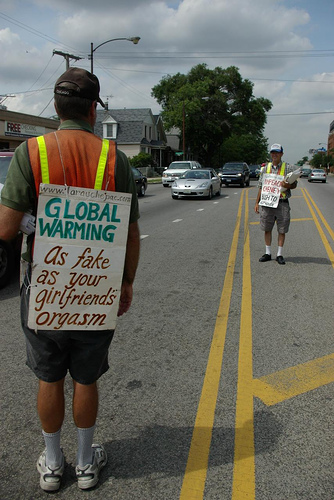 The picture above is pretty tame compared to our ramp squads in the 70s and 80s. You would be dropped off at an exit ramp from a freeway and stay there all day until you were picked up. That meant that tens of thousands of cars and trucks were spewing carcinogen-laded exhaust into your nostrils and lungs. If you were in the office, you got the smoke and filth.

We also went after Teamster and trucker money by deploying at truck stops. There you not only had nonstop exhaust, but also had nonstop direct fuel spillage pooling on the ground for your breathing pleasure. A card-table shrine in a big city gave you endless cars, busses and trucks to inhale as well. On the way to your destiny you probably had a LaRoucheMobile with a fallen-off muffler and exhaust spewing into the interior. Outdoors you received sun exposure far beyond what is acceptable. Then back to the office with some fries to stay up into the late night and up again to do it all over again--my God, you were doomed.

You then have to do this every day for years and years along with a never-ending high stress level to see how many members have turned out as they hit their 60s.

There is more to this madness, however. Part of being in the LC was that there was no such thing as industrial or chemical pollution since that was the method the oligarchy used to shut down industry and create the new dark ages to kill off billions. Life is a bitch as Mark Calney ran for office many times on our platform of hating environmentalists as being a hundred times worse than Hitler. We all had that campaign and if there was any industrial or toxic waste spill, it was a plot or a hoax like the Three Mile Island nuclear plant core meltdown was.

What I find interesting is that when it comes to the effects of certain pollutants, they may not appear for many years. The question is always "what if?"

-What if you were not in the LC and you did not inhale those toxic fumes at the intersections?

-What if you were not in a smoke-filled room for 16 hours a day?

-What if you did not spend all of your time in a highly stressful state?

-What if you were not sleep deprived for decades?

-What if you worked a regular 40 hour a week job instead of six to seven days a week forever?

-What if your diet was not based on the dollar menu?

-What if you had that inflamed lymph node checked out, that regular mammogram or blood test instead of being so sick you had to see a doctor?

-What if you spent six years in school instead of being half-asleep in a smelly cult office during a lecture till midnight.

-What if you did not accompany Nancy Spannaus to that abortion clinic decades ago?

-What if you [had spent your time] making your life easier instead of Lyn's?

I do not wish for anyone still in the cult to pass away. But why do we find older LCers passing away years and years before an 88-year-old LaRouche?

Is it the Schiller Institute obituary you will get asking for a donation by Helga?

The above is part of a longer posting here.