Rumor has it that Lyn really ripped into the NEC last week for failing to "build" sufficiently for the Great Man's latest webcast. Whatever that could possibly mean.

Then there's this little squib someone sent me recently (from a briefing several months ago, I believe)the sender wrote that, in light of my previous analysis of LaRouche on the classics, he/she wanted me to comment on another treasure.

Here is what LaRouche said [as reported in the briefing]:

"[G]o back to the question I've referred to a number of times, recently, on the question of the Iliad. Look at the crisis, look at the Iliad and then look at the Peloponnesian Wars that followed, and so forth. Now, what do you have? You look at the Iliad, and what is getting all these people, you know, Helen of Troyprobably the ugliest bitch of the time, and she's called this beautiful something-or-other, hmm? And now you have this 'thousands ships,' the legendary 'thousand ships'that were sunk, by her face! [laughter] That's what the story says.

"Then you look at the Iliad, look at the content, and you find, you have two layers: You have the two top layers, you have the gods and the demi-gods. You have the people who are considered the gods of Olympus. And you have people, on a slightly lower level, who are demi-gods, who are usually considered the illegitimate offspring of some god who's been fiddling around with sheep-herding girl, a shepherdess. Now, what happens? You've got these people, these armies, they've got their forces, they're going to fight this war. And the war goes on, and on, and on, and on, and on. And they're fighting this war. How's the war being fought? Well, by nighttime or daytime, one of these gods or demi-gods comes up and says, Well, Zeus has said, you do this. Or, then you get the problem of the family politics of Zeus and his circles, and their quarrels in these family politics; and these different gods of this Olympian god system are now manipulating people, by saying, "Do this, or else"; or "if you do this, I'll help you," and that sort of thing. So therefore, you see that what is happening essentially, is a destruction of a civilization, because people believe in the whisperings of what they believe are gods or demi-gods." 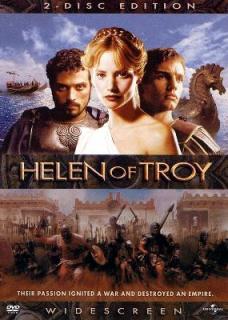 "Maybe he saw the movie" (or this TV series)?

1. First, there's the Trojan war ("the crisis") and the "Peloponnesian Wars [sic] that followed."

Homer wrote the Iliad in, say, the 8th or 9th century BC.

2. Helen of Troyisn't it too characteristic of Lyn to figure she was the "ugliest bitch of the time"? Isnt his misogyny just splashing out all over?

3. One thousand ships...Well, the Iliad has the justly famous Catalogue of Ships, which lists all the Greek contingents that sailed with Agamemnon to Troy, something like 1,186 ships listed.

The "thousand ships" comes, of course, not from the Iliad (once again Lyn is caught with his mental pants down), but from Christopher Marlowes Dr. Faustus, to wit:

"Was this the face that launch'd a thousand ships
And burnt the topless towers of Ilium?
Sweet Helen, make me immortal with a kiss."

Here we note that the ships are being launched, not sunkanother oopsy-daisy for Lyn. The topless towers of Ilium are, of course, Troy.

From there on, not much to say. Lyn's analysisthe war goes on, and on, and onis what you would expect of someone who hadn't read the book. Maybe he saw the movie?

So, basically, he asserts a causal connection between the Trojan War and the Peloponnesian War, takes a characteristic "I hate women swipe at Helen, confuses Homer and Christopher Marlowe (after all, Christopher Marlowe "followed" Homer, did he not?), confuses launching and sinking, and winds up in disconnected mutterings about the gods. Remember, Lyn has always considered himself to be Prometheus, at daggers drawn with Olympian Zeus.

Still around Lyn for the intellectual stimulation? You've been had.