or the life of a make-believe English squire

Eyewitness report, reproduced here just as it was emailed to me yesterday:

Sometime in 1985 LaRouche ordered the purchase of a stately mansion on top of a wooded hill west of Leesburg that previously belonged to a movie star (Kevin Costner?) and its surrounding 170 acres. Upon purchase of the property, he ordered numerous improvements including a stone estate gate and the appropriate fencing (for "security"). 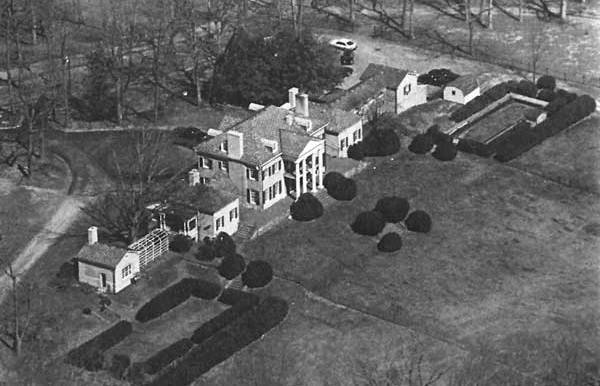 LaRouche's 171-acre Ibykus Farm in Loudoun County, Virginia. It was sold to pay the cult's debts after Dear Leader went to prison.

He ordered a white marble plaque to be installed on the left pillar of the gate with the word "Ibykus" carved and gold-plated on it. He ordered that when the workmen finished installing the plaque they should cover it with the appropriate fabric and wait for the unveiling.

When the day came, he summoned the National Executive Committee to Ibykus for the unveiling ceremony. Dressed in what he believed to be informal English country squire attire, complete with elbow-patch-embossed tweed jacket, riding boots, and woolen cap, he together with Helga led the NEC and a crowd of hangers-on (security staff, cooks, estate foreman Billy D., and the inevitable Lonnie W.) down the 100-yard path from the mansion to the estate gate, talking excitedly about the property, how many trees and creeks it had, what kinds of new cattle breeds Billy D. would raise with new scientific methods and how these cattle would supply Labor Committee members with good beef for their dinner for years to come.

He was bubbling with pride and excitement in his English country squire attire (or was it disguise?).

When the group arrived at the gate for the unveiling ceremony, he stood right next to the gate pillar where the still-veiled marble plaque was with the "Ibykus" inscription still hidden by the ceremonial fabric. He motioned to others to stay a discreet distance away and posed for the photographer.

Then the workmen pulled the veil aside and the marble plaque was revealed...with the letters "IBYKUS" upside down!

Everybody, Helga included, started laughing uncontrollably, except LaRouche. He was initially befuddled and didn't know why everybody was laughing, until Helga told him to stop posing for the camera and turn around and look at the plaque behind him. When he saw it he got infuriated and screamed seven unforgettable words:

"Stop laughing! This is not a joke."

Then he turned around and marched furiously back to the mansion.

The rest of the crowd followed behind at a leisurely pace, trying to suppress their uncontrollable giggles.