Posting by Mitch Cohen at
manhattangreens@yahoogroups.com, May 14, 2010

LaRouche and his organizations are fascists whose minions--including his then-leader in Europe, Webster Tarpley--organized the vicious Europe-wide slander campaigns against Petra Kelly that set the climate for her murder, ostensibly by her ex-military husband who was affected by those campaigns.

In LaRouchian lore, the "Queen of England" is a buzz word for "Jews" (no, I'm not kidding).

While some of LaRouche's economics messages are 80 percent accurate, it's the other 20 percent that's insane.

I've written about this before, and if you want I'll send further details.

My advice: Stay away from LaRouche completely; don't even engage.

Are you aware that the only hope for saving our country is the reigning in of the banks against another bailout. You are spreading a malicious negativism against the one group that is calling for the passage of the new Glass/Steagall bill, namely the Cantwell/McCain bill that will stop the bailout. Have the decency to read about it on larouchepac.com. And who do you think has gotten you to think the way you do? Kissinger and his gang. So, call off your dogs!

Well, Alisha is simply wrong--and in addition, she doesn't answer the specific points I raised.

There are LOTS of organizations opposing the bailout of the banks--the new ones as well as the old--including the Green Party and the Manhattan Greens, which are both a lot larger and with far better credentials (believe it!) than LaRouche and his brownshirts and front groups.

For her to say that I think the way I do because I am a puppet of Kissinger is lunacy.

Having at one time in my life been involved with organizations that worked for extended periods with LaRouche, I understand only too well the psychological pressures LaRouche and his gang try to exert, including the puffery (big lies) that Alisha seems to [have] fallen for.

The Kissinger-puppet nonsense is exactly the kind of charge that LaRouchies in the 70s and 80s made about anyone who disagreed with them--in order to smear any opponent of their fascism and divert from the actual issues at hand.

Meanwhile, Alisha says nothing about LaRouche's deep involvement in the vicious slander campaign against Green Party founder Petra Kelly, leading to her death. Or of the kidnapping and imprisonment by LaRouchies [of] my old friend and concert pianist Alice Weitzman (google her name and the NY Times) decades ago.

LaRouche campaigners, like Hitler's SS, should be afforded no forum in the Green Party.

Who is Mitchel Cohen? 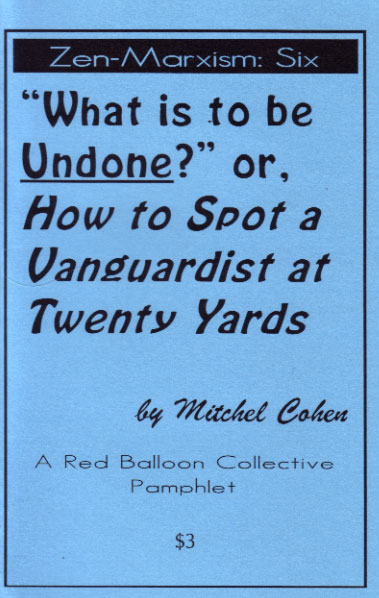 Impish pamphleteer and crusader against the humorless.

Mitch Cohen is chairman of the local station board (probably collective is a better word than board) of WBAI-FM, New York's longtime leftie station affiliated with the Pacifica Radio Network. He's also an activist with the Green Party.

His views on the LaRouche org are well worth listening to because during the mid-1970s he worked in alliance with and observed closely in their early stages the "Big Three" (big in their respective frog ponds) of U.S. political cults: LaRouche's NCLC, Fred Newman's International Workers Party and Gino Parente's NATLFED, which were all feverishly borrowing Orwellian methods of control from one another.

By the late 1970s, Mitch had developed a pretty clear understanding of the cultic and provocateurish nature of these groups, and I was fortunate enough to contact him while writing my first cult-related article--on the Newmanites. Mitch was one of several people (including Harvey Kahn, Chip Berlet and Myron Jefka) who provided me with a foundation for beginning to understand the malignant (but endlessly fascinating) world of political cults.--DK