"The West was unable to free the millions already under Communist domination, but we were determined to hold the line. To transform this determination into practical policy, President Eisenhower's Secretary of State, John Foster Dulles, formalized the de facto containment policy into the flawed strategy of massive retaliation. 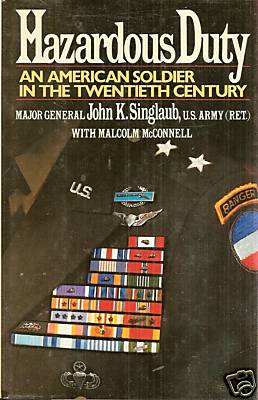 If the Soviets or Chinese broke through our containment wall to expand their empires, we would respond "massively" with nuclear arms. It was an inflexible strategy; there would be either peace or nuclear holocaust.

"This was the troubled geopolitical situation my colleagues and I faced as we prepared for the responsibilities of senior command. Because the Cold War eventually lasted so long, it's easy to forget how unsettling the new reality was at the time. As soon as both sides had practical nuclear arsenals, the haunting prospect of a third world war fought with hydrogen bombs--in which hundreds of millions of civilians would be incinerated along with their cities--had to be accepted as a practical possibility, not an insane nightmare. In the bizarre language of the period, military planners did indeed have to think the 'unthinkable.'

"Within the Defense Department, it was the Air Force that benefited most from our massive retaliation policy. They had the planes and missiles to deliver the nuclear weapons on China or the Soviet Union. The more massive our threat, the Soviet (and later Chinese) counterthreat, and our own anti-counterthreat response became, the greater the Air Force's need for manned strategic bombers, fighter-bombers, and long-range missiles. By 1954, there were even rumblings that the Air Force would eventually replace the Army, which was viewed in some quarters as being on the verge of obsolescence. Conventional ground forces, it was argued, simply couldn't be defended against atom bombs. And nuclear weapons were, after all, cheaper than a huge standing army. Even though we had a peacetime draft, expanding the U.S. Army to the size needed to realistically counter the combined threats of the huge Soviet and Chinese ground forces would have completely altered our peacetime society. So for almost a dozen years--until the Cuban Missile Crisis of 1962--America relied increasingly on its nuclear strike force, to the detriment of the Army.

"That such a ludicrous argument could gain the credence it eventually did is a reflection of the dilemma we faced. Postwar American prosperity was fueled by a free-market consumer economy supported by the world's largest middle class, who enjoyed remarkably low taxes. On the other hand, meeting our global Cold War commitments required a steadily growing defense establishment, which each year absorbed a larger portion of our national wealth. The country wanted both guns and butter, but our political leaders feared the economic dislocation of such a policy. A nuclear arsenal was simply cheaper than a large conventional force. In one form or another, this dilemma has bedeviled us through all the decades of the Cold War.

"Almost as soon as the massive retaliation doctrine was accepted, however, its shortcomings became obvious. The Soviet Union was constrained from a conventional assault on Western Europe for fear of nuclear retaliation. And the Chinese were equally discouraged from renewing the aggression in Korea or invading the Nationalist Republic of China on Taiwan. But fear of America's nuclear arsenal did not stop either the Chinese or the Soviets from supporting (and in some cases actually sponsoring) the so-called wars of national liberation that became one of the major military aspects of the Cold War."

"These two crises, although disparate in nature, underscored the type of military situation the United States could expect to confront in the unstable world of the Cold War. The sad fact was that we had almost no means of influencing these events because we lacked the ability to project our military power quickly and decisively on a global scale. America had opted for the least expensive defense establishment in terms of financial and human sacrifice. Nuclear weapons were cheaper than a huge standing army, and the air and sea lifts needed to transport this army around the world. And this also meant that most of our skilled young citizens could be employed in productive civilian employment. But Hungary and Suez had demonstrated that the policy of massive retaliation was patently impractical. We couldn't simply threaten to incinerate the Soviet Union every time American and Soviet interests clashed. We needed a more flexible, practical response."