So LaRouche thinks Hitler had a "health care plan"?

[I traveled to England to participate in the June 26 University of Northampton symposium, "Speaking with Forked Tongues: The Rhetoric of Right-Wing Extremism Today." The presentations given by scholars such as Roger Griffin, one of the world's leading experts on fascism, were illuminating and often witty. I'd like to think that Chip Berlet and I, plus ex-LaRouchians Yves Messer and Aglaia Beyes-Corleis, plus Erica Duggan and other parents, added some useful insights during the LaRouche panel. I'm amused, however, to see that two Factnet participants who weren't there have explained forked-tongue language as clearly as ANY of the symposium presenters.--DK]

Take a second look, everyone, at the photo caption that accompanies the photo of [LaRouche activist] Pat Noble at North or South Fork, or wherever the heck it is: 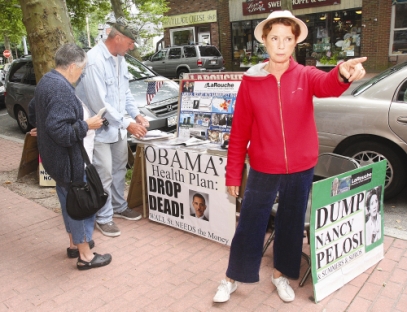 Gimme a break. The Nazis didn't have a "health care plan." The Nazis' T4 Program was the euthanasia program whereby hundreds of thousands were killed, according to the postwar Nuremberg trials of the Nazi doctors.

Is the organization so deluded (yes) that it is running around talking about the "Nazis' health care plan"?

One thing Hitler did NOT have when he ran for Reichspresident in 1932 was a "health care plan."

And drawing mustaches on photos of Obama doesn't change that fact.

I'm no Obama fan, to say the least, but honestly, the LaRouche org members are idiots.

It's the same idiocy seen in the leaflets Bruce Director et al. were handing out not long ago at the Leesburg DMV.

Only people who have NO conception of what the Nazis were--and that's LaRouche all over, and always has been--could talk about Nazi health care plans. It's in the same category as what Molly and Ken Kronberg used to refer to as the "Auschwitz was a daycare center polemic" that LaRouche and his minions essayed in the late 1970s/early 1980s.

Or the "Hitler was raised in a Warburg orphanage" claptrap LaRouche tried on for size in the the same period. 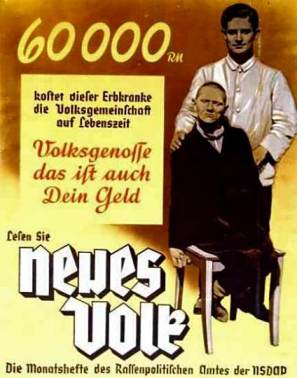 "Compassionate" orderly prepares to get rid of "useless eater."

Well. I disagree a bit, but only in minor details of what you wrote. The Nazis actually presented the T4 program against disabled people as a health care program. For the PUBLIC the T4 was about improving the health of the disabled!

There is much literature about this and somewhere on the internet even an excellent homepage with examples of letters written to parents, and the official documents and public propaganda about the T4 program. (Documents and propaganda differ. The propaganda talks about health care, the documents about MURDER.)

"Various methods of deception were used to gain consent--particularly in Catholic areas where parents were generally uncooperative. Parents were told that their children were being sent to 'Special Sections' for children where they would receive improved care. The children sent to these centers were kept for 'assessment' for a few weeks and then killed by lethal injection, their deaths recorded as 'pneumonia.' Autopsies were usually performed, and brain samples were taken to be used for medical research. This apparently helped to ease the consciences of many of those involved, since it gave them the feeling that the children had not died in vain and that the whole programme had a genuine medical purpose." http://en.wikipedia.org/wiki/Action_T4

This said, I want to make it clear that the method of the LaRouche movement is insane. This method has been (even before 1973) to exaggerate. A small increase of cost is called hyperinflation, a healthcare program that they disagree with is called Nazi. In fact they call just about anything and anyone Nazi! This method of exaggeration is typical for a cult.

Is there a method in LaRouche's mad use of epithets? See below.

And the current attacks on the Obama health care program are especially absurd because Lyndon LaRouche has an internal health care and retirement "program" for the older members of the organization that is far worse, and far more disgusting, than the things they accuse Obama of!

The crime of Lyndon in this case is above all DOUBLE STANDARDS! (Which is also typical for a cult.)

European--it doesn't matter how the Nazis presented it. What matters is the reality.

If Bishop Galen in 1941, in wartime Germany, could give a sermon blasting the euthanasia program as murder, surely we can recognize it as the same. Even the Labor Committee, one would think, could do that.

We all throw around the phrase Big Lie, but the Nazis, while not its inventors, were its theoreticians.

I offer the following quote from Mein Kampf to prove that point:

"All this was inspired by the principle--which is quite true in itself--that in the big lie there is always a certain force of credibility; because the broad masses of a nation are always more easily corrupted in the deeper strata of their emotional nature than consciously or voluntarily; and thus in the primitive simplicity of their minds they more readily fall victims to the big lie than the small lie, since they themselves often tell small lies in little matters but would be ashamed to resort to large-scale falsehoods. It would never come into their heads to fabricate colossal untruths, and they would not believe that others could have the impudence to distort the truth so infamously. Even though the facts which prove this to be so may be brought clearly to their minds, they will still doubt and waver and will continue to think that there may be some other explanation. For the grossly impudent lie always leaves traces behind it, even after it has been nailed down, a fact which is known to all expert liars in this world and to all who conspire together in the art of lying."

The grotesque irony in the present situation is that LaRouche and his dwindling band have put themselves forward for decades as the opposition to the Nazis, the fascists, the Third Rome, the Synarchists, the this and the that.

So you would think they would know, after all these years, that Hitler didn't have a "health care plan."

But in fact, in their own small and ever-smaller way, they too are practitioners of the Big Lie school of political persuasion.

Perhaps one of the reasons for his signal lack of success is that Americans, despite our well-known and numerous flaws, have a degree of individual independence that makes us a hard sell when it comes to LaRouche's brand of totalitarian twaddle.

Let's agree together that we can thank our lucky stars that LaRouche never had the political skill, strategic or tactical sense, or powers of concentration, to get beyond first base politically.

---------------------------------
Comment by DK: By constantly calling everything and everyone "Nazi" or "fascist," LaRouche both desensitizes and disorients his followers so that they often end up doing and saying things that could fairly be characterized as serving a Nazi-style or fascist agenda--but without being fully aware of what they're doing. For instance, the LaRouche Youth Movement marched against the "Satanic" Jewish banker and Holocaust refugee Felix Rohatyn (see here) but included a banner calling him a "Nazi."

LaRouche actually worked out a theory of sorts about this kind of manipulation--read here Chapter 27 ("LaRouche's Purloined Letter") of my book on the LaRouche movement.