A glacial silence from Wiesbaden... 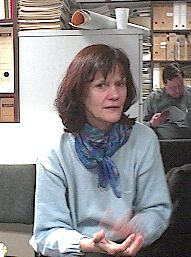 Former LaRouche cadre Ortrun Cramer: She orchestrated the coverup along with Helga Zepp-LaRouche, and knows all about the passport stained with Jeremiah's blood. Will she ever tell what she knows?

Saw in TV programme for next week here in the UK that Channel 4 will be broadcasting a programme next Thurday, 1 April at 9pm, about families where young adult children have gone abroad and then died.

It will focus on two cases--a British woman murdered in Japan and Jeremiah Duggan.

It is just so sad that answers have still not been given about what really happened. I know some of the people involved in Wiesbaden (Jonathan, Rainer, Ortrun and the late Hartmut) and I can't imagine any one of them deliberately hurting anyone, but why won't they just tell Erica Duggan what really happened?

I think they won't because they, and all the others--Uwe, Anno and Elisabeth, Michael and Gabriele, etc.--are terrified.

It seems clear that they won't say what really happened because something bad DID happen, and whatever that bad thing was, it was sufficiently bad to terrify them into silence.

They need to find their courage. In their youth they wanted to change the world, to move mountains, to wrest future history from its chart.

They were mantled in hubris.

Now, they can't find the courage to tell a grieving mother and father what happened to their beloved 22-year-old son.

In human, moral terms, these people need to find the plain courage to do something far harder than following Pied Piper LaRouche into that iron mountain of hubris.

If any of them is able to do that, he (or she) will finally be doing the Right Thing.

Fear is no doubt one of the most important reasons why the individuals named--who were driven out of the org by LaRouche in 2006 and early 2007--are keeping their mouths shut. But it's also true that they still, to varying degrees, have the LaRouche ideology in their heads. I'm speaking of those who've set up a new org in Wiesbaden that champions the cultural and political line of the LaRouchians in a watered-down form, and those who run a formerly LaRouche-controlled printing business that solicits work from the same German Federal Police who've helped squelch a full investigation of Jeremiah Duggan's death.

And I would suspect that the failure of these ex-cadre to come forward can also be partly explained in terms of denial, a universal human defense mechanism against fear, shame and embarrassment (read here).

If the Wiesbaden ex-members were to reveal what they know about Jeremiah's death--and especially if Ortrun Cramer were to tell why she was in possession of Jeremiah's blood-stained passport (which was not found on his body by the police)--then it might open the floodgates and these former cadre would have to start looking at their entire sordid history as the top figures in the German LaRouche movement including their dealings with old Nazis, neo-Nazis, neo-fascists and Falangists in Europe over more than three decades, and their involvement in all kinds of spying, dirty tricks and sleazy posturing aimed at impressing the security services of various countries. 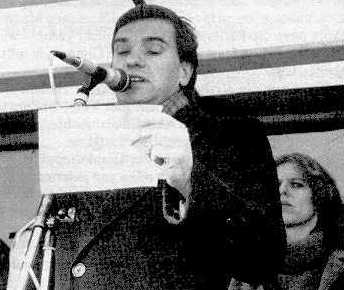 Anno Hellenbroich ran LaRouche's intelligence gathering operation in Germany. He was still in the org when Jeremiah Duggan died, and surely knows what happened.

For people who regarded themselves as "leftists" when they first joined LaRouche and who engaged in desperately elaborate rationalizations of their subsequent reversion in all but name to the politics of an earlier German era, this type of confrontation with reality would not be easy--and as a result, most will probably remain silent (or play "limited hangout" games in the manner of captured spies) for the rest of their lives.

Regarding some of the possible incidents and relationships that the German ex-LaRouchians might have to come to terms with if they decided to make full disclosure, read here and here. And for more on the psychology behind their glacial silence, read the comments that Erica Duggan (whose efforts to get them to tell the truth about her son have been spurned again and again) posted here. Also read the analysis by Factnet's "xlcr4life" here.