Lyndon LaRouche's version of the Protocols of the Elders of Zion? 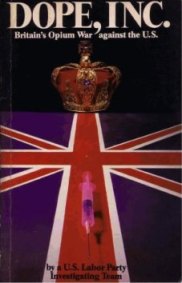 The following excerpts (with highlighting added) are from an anti-Semitic tract that has enjoyed wide circulation and exerted a malign influence among U.S. rightwing conspiracists over the past three decades. Commissioned by LaRouche and researched and written by some of his ultraleft-turned-ultraright cult followers, it was first published in 1978, with an Italian translation in 1980, a Spanish translation in 1985 and new English language editions in 1986 and 1992.[FN 1] The excerpts here are from the 1978 edition, almost certainly the one that gained the widest readership even if one regards as inflated the LaRouchian claims that it sold over 100,000 copies. The full first-edition text of this grab bag of paranoia and hate is available on the LaRouche Youth Movement website here.

There are unhighlighted passages in the excerpts below, and also passages in sections not included here, that deal with the purported role in the drug trade of British non-Jewish aristocrats and bankers whose relationship to the alleged Jewish conspirators is depicted ambiguously. Some passages describe the Jews as junior partners of English and Scottish kingpins; other passages strongly suggest that the Jews really run everything. Certainly the defense of the alleged authenticity of the Protocols of the Elders of Zion on pages 31-33 (link below) would give gullible readers the impression that the "Order of Zion" either is already in control at the highest level or is plotting to achieve such hegemony at the earliest possible moment.

I'm aware that some LaRouche followers in the late 1970s--righteous individuals who would quit the org soon thereafter--tried to interest LaRouche in British aristocrats as a way of diverting him from his increasing anti-Jewish obsession. But whatever ruse of this type some of the researchers on Dope, Inc. may have tried to employ, it is a fact that LaRouche--whom David Goldman claims is the one who ultimately determined the content of the book's conspiracy rants--had repeatedly asserted, and would continue to assert, that certain Jewish families hold a controlling interest in the United Kingdom, both economically and politically (read here and here, and also note LaRouche's definition of "British" as meaning "Rothschild" in The Case of Walter Lippmann here).

LaRouche made this point more slyly and from a different angle in an extraordinary December 1978 article, "That Zoo Called 'The House of Lords'" (here), in which he depicted the British Anglican aristocracy and royals as a pack of inbred retards. The implication was that these non-Jewish aristocrats would be incapable of creating and running the intricate narcotics conspiracy described in Dope, Inc. and that it is the Jews (perhaps with the help of the Scots) who control Britain, just as it is the Jews (according to Dope Inc.) who control the North American Mafia. One might say that in LaRouche's imaginary world of plots and counter-plots, Lord Rothschild is to the House of Lords as Meyer Lansky was to the Syndicate.

One of the senior authors of Dope, Inc., Konstandinos Kalimtgis, would quit the LaRouche org in December 1980, and would oppose LaRouche's public influence--very effectively--during the 1980s. Another, Jeff Steinberg, continues to function as LaRouche's security chief 31 years later, and hopes to become the octogenarian's successor. The third, David P. Goldman, resigned from the org in 1988 and would break decades of silence in May 2009 with his "Confessions of a Coward," an article on the First Things blog that has attracted considerable attention. In this piece, he discusses his former role in the LaRouche movement, including his co-authorship of Dope, Inc., admitting that the book "had unmistakable anti-Semitic overtones" and that, in general, "Jewish banking families kept popping up" in LaRouche's conspiracy theories.

The below excerpts should provide ample proof to just about anyone except hard-core LaRouche followers that Goldman is correct in saying Dope, Inc. contains "anti-Semitic overtones"; indeed, these excerpts suggest that Goldman is greatly understating the case, and that Dope, Inc. is actually a Jew-baiting tract of the highest order of virulence. As to Goldman's claim that he only did numbers-crunching on the book, that "LaRouche took my quantitative study and combined it with the paranoid musings of other researchers," and that Goldman himself is only responsible for remaining silent out of fear: I find these assertions utterly preposterous.

READ THE FULL STORY HERE OF DAVID P. GOLDMAN'S BLATANT LIES AND ARTFUL EVASIONS RE HIS HISTORY AS AN ANTI-SEMITIC PROPAGANDIST FOR LAROUCHE.